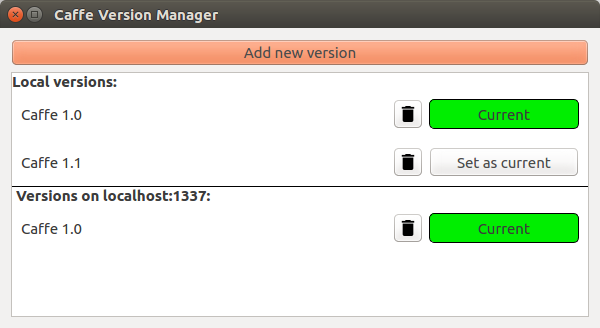 To add a new version, use the Add new version button. The user will be prompted with a dialog to select the host on which to add the new version. The now following dialog is the same described in Setup. Here the user needs to declare the files and folders of the Caffe Version to be added.

To remove a version, the user can just click the Delete Version button, indicated by the trash can symbol on each version. If, by removing a version, the current version changes, Barista needs to be restarted.

The Set as current button does exactly that. The current version is indicated by a green label sitting at the buttons position. If Barista needs to be restarted after a version change, the label will be yellow indicating the need for a restart.

Details about every version, such as the different file locations, are listed if a version is selected using the left mouse button.

The layers displayed in the Layers-dock are provided by the local current Caffe Version. The training of a Session is done using the current version of the sessions host.